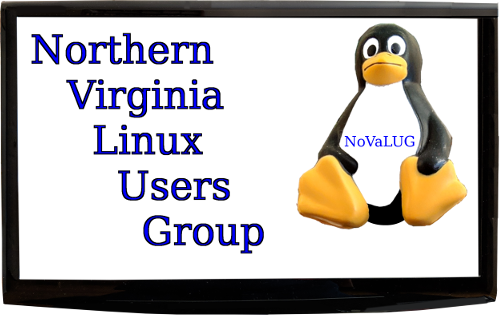 To attend future meeting, go to NoVaLUG's Meetup site. RSVP by clicking on  Attend online .  A link to join the meeting will be revealed on Meetup.

New attendees may wish to familiarize themselves with ZOOM before the meeting by going to ZOOM Help.

May Resume
in the Ball

The Northern Virginia Linux Users Group (NoVaLUG) is the oldest LUG in the Northern VA area and likely in the whole of US. Established 1993, the group's focus is on open source software with a primary area of interest being Linux. NoVaLUG members meet monthly to socialize and learn from one-another, as well as from guest speakers. Attendees include a mix of IT professionals, hobbyists, students, and other interested individuals. Presentations are open for Q&A. Topics of presentations include software use and development — a wide range of related topics, some esoteric, e.g., assembling and using a micro-computer (Raspberry Pi) to do aerial photography from a kite. Time us usually set aside at the end of meetings for attendees to discuss job opportunities for seekers as well as offerings by employers.

NoVaLUG is an all volunteer organization. Resources, including human, are provided gratis. Read about it here: Infrastructure of NoVaLUG. Speakers sought — contact John Kennedy.

This web page was developed and written with open source tools. Read more below about this example of the use of open source software.

Monthly meetings are held in Northern Virginia, normally on the second Saturday, from 10:00 a.m. to 12 noon; they may be canceled around holidays. Attendees are encouraged to arrive by 9:45 a.m.

NoVaLUG maintains a mailing list for discussion of topics related to Linux and other open source subjects. Participants post questions to which others may provide answers. Announcements and other items of interest may be posted to the list. Interested parties may join by accessing the NoVaLUG mailing list entry page). We ask that participants behave in a civil manner and respect the rights and opinions of others.

Linux and open source enthusiasts are encouraged to join the mailing list and to participate in discussions thereon to make it a vibrant resource for the community.

What's with the Penguin?

Tux, Linux Torvald's personal mascot, is the official brand character of the Linux kernel. Originally created as an entry to a Linux logo competition, Tux is the most commonly used icon for Linux, although different Linux distributions depict Tux in various styles. The character, also commonly called the Linux mascot, is used in many other Linux programs and as a general symbol for Linux. [Ref: Wikipedia]